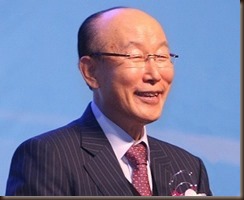 The head of the largest church in the world, Yonggi Cho, has come to Melbourne expressly to thank a Melbourne church for sending missionaries to Korea late in the 19th century. The missionary endeavour they started has resulted in there being 17 million Christians in South Korea today.

The church he came to thank is St Mary’s Anglican Church in Caulfield. Our “Christians who have made a difference” segment today is brought to us by the minister of St Mary’s, the Reverend Mark Durie.

The first Australian missionary to Korea was Henry Davies in 1890, but he died of smallpox and pneumonia after 8 months, aged only 32 years, and is buried in Busan.